Amateur telescope making was a popular way of getting a telescope at that time. It’s easy to forget that a large back garden scope was a 6″ reflector. Telescopes were an expensive luxury and few could really afford some of the instruments in the catalogue. The Unit Purchase Plan proved a firm favourite. You could either custom order an instruments with components to suit your budget, or you could buy parts to make your own.

The idea was simple. The catalogue had a section for the unit purchase plan. You selected one component from each section to suit your budget and by the time you reached the bottom of the page you had the makings of a telescope. This system stayed in operation all the way through Fullerscopes production. 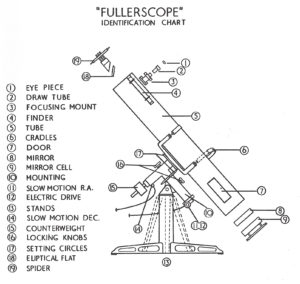 Dud was a somewhat shameless marketer of his products and would take every opportunity to get the name out there no matter what the context….

Broadhurst Clarkson and Co were struggling by the early 1970’s. As widely reported, Japanese imports were hitting sales hard and the business couldn’t cope. Dud had the opportunity to purchase the company in 1973 and he did so. This was a huge risk for him and his family but Dud went ahead.

Taking over the business of Broadhurst Clarkson and Co, he moved Fullerscopes to Telescope House. No.63 Farringdon Road became the shop and workshop for the business. 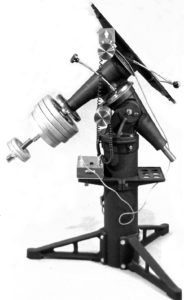 The Fullerscopes MKIV with all the accessories! 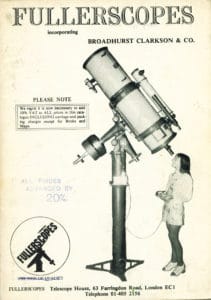 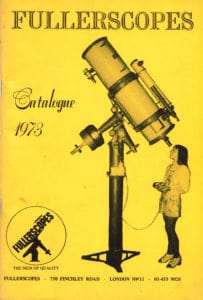 The workshop continued to produce telescopes as it had done for nearly 200 years alongside the Fullerscopes range. Most attention was placed on building and supplying the Fullerscopes instruments as there was not as much call for the traditional scopes. There was still a thriving workshop business in repair and restoration though, so Ernie was kept busy. Ernie Elliot was the senior craftsman and had joined the firm in 1942. 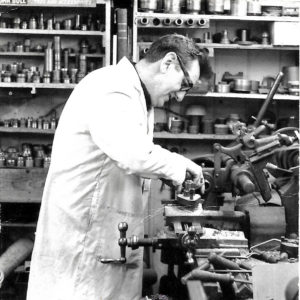 Ernie. And yes, he did drive the fastest milk cart in the west.

More about Ernie can be found here or clicking his picture.