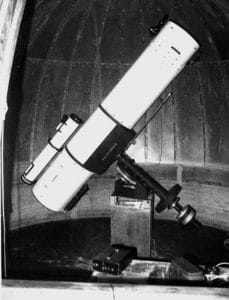 The 70’s saw the firm taking on larger commissions such as the 18.25″ newtonian at the Charterhouse Observatory in Somerset. You can see the observatory’s website here.

The economic backdrop of the time was tough, and the country had an energy crisis in 74-75 with 3 day weeks and coal shortages.. 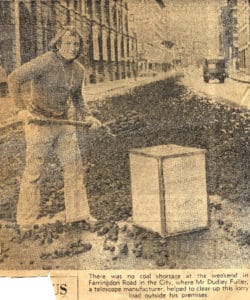 At one point a coal lorry shed its load on Farringdon Road, just outside Telescope House. The Telegraph was there to photograph the public spirited Dudley Fuller helping with the clean up operation. In truth he was actually in the process of nicking as much coal as he could fit into the tea chest but somehow he came up smelling of roses.. 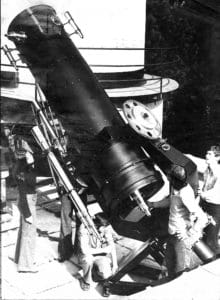 There was also the 610mm /24″ Newtonian built for an observatory just outside Sarajevo. Dud’s friend Boris Barlow consulted on the design and it was quite an ambitious project. Boris had developed a temperature compensated mirror cell which was quite something for the time – though not entirely revolutionary.  Boris spent a lot of time as a consultant for the design and wasn’t overly enthusiastic about Dud’s offer of a small drawing board and a calculator rather than actual payment.

The firm saw out the recession of the 1970’s but the early 80’s were a different story.There were some very quiet periods  and the company’s future hung in the balance. The firm did get a grant from the Greater London Enterprise Board after an exhaustive company profiling and marketing report. 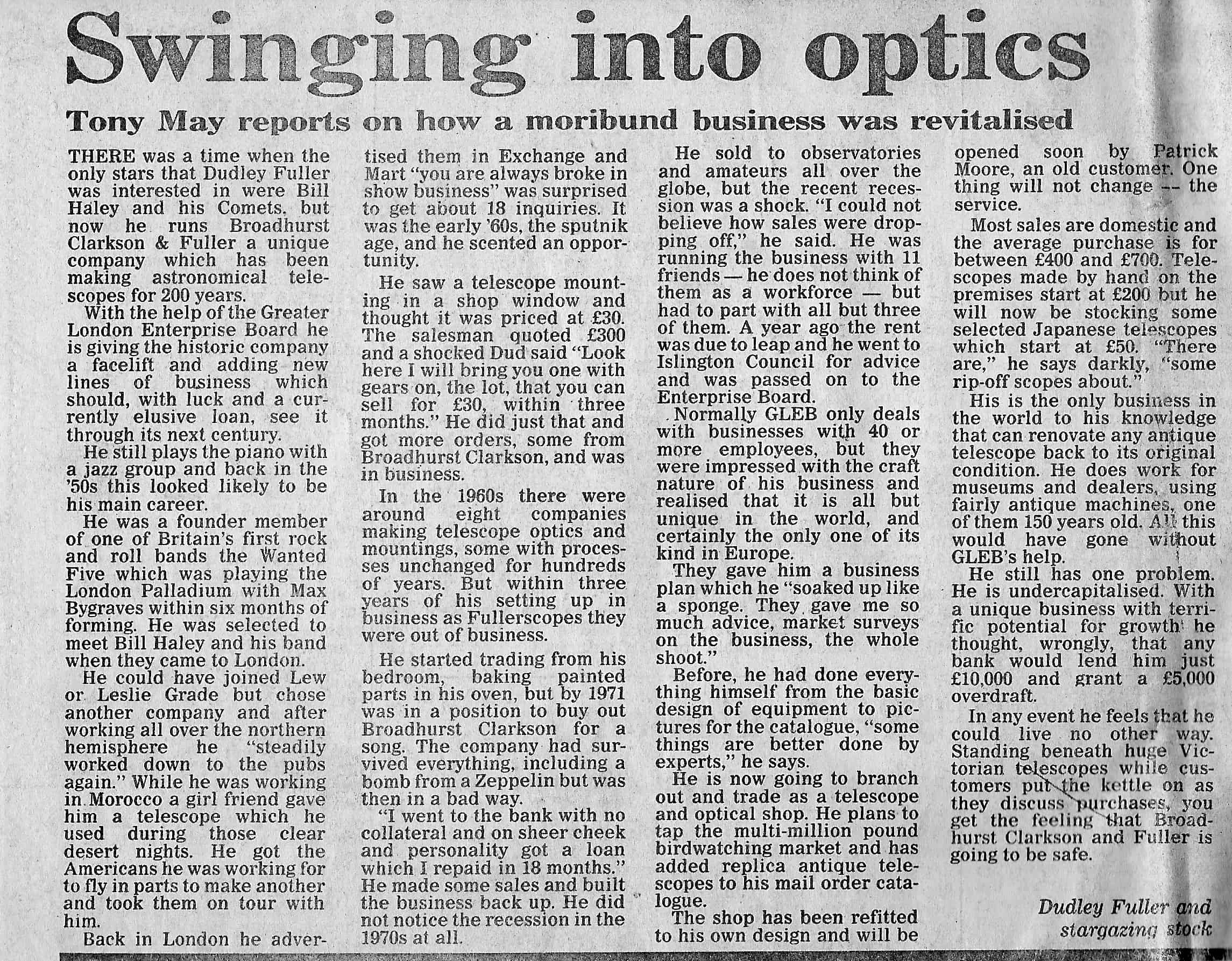 A small grant was received, but that wasn’t huge. Testament to Dud’s determination and general approach, he even managed to convince the bank manager to authorise a loan based on the illness of his mother-in-law and the fact that surely he would inherit the house at some point soon! Somehow he pulled it off, not for the first time.  This was quite typical of Dud. Dud’s wife Diana took the same risks as Dud to keep the business going in the early days too.

Business picked up  with the appearance of Halley’s comet in 1986. The public wanted to see it, and telescopes were the must have item!

For many years Fullerscopes eyepieces and small items were ordered in from Japan. This was to be a turning point in the fortunes and future of the firm. For a short while, BC&F were importing both Celestron telescopes, and Meade as well. Both as sole distributor for the U.K. One morning a fax arrived from Celestron essentially giving them the choice – them or us! Dave and Dud chose Meade and that started a very productive and successful working relationship.

Fullerscopes were still a popular part of the business, and scopes and mounts were still selling well through the 1980’s. Larger commissions were taken on, and also some new products prototyped. Add to that

Meade had some popular telescopes already – the 2080 and 2150 Schmidt Cassegrains, the 2054 desktop Schmidt Cassegrain as well as some refractors and newtonians. It was the release of the LX200 that saw real change in the world of amateur astronomy. The GOTO telescope had arrived! 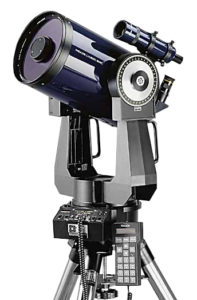 Meade were innovators at that time and BCF took full advantage.

By the late 80’s the company were also starting to operate on a scale that was pretty new to the telescope industry in this country – bringing in larger quantities of telescopes rather than single orders.

As the Meade business grew, Fullerscopes instruments started to take a back seat. Production stopped around 1994.

Things really took off in 1996 with the release of the Meade ETX!

Loosely based on the Questar 90mm, The ETX was a fantastic, portable Maksutov Cassegrain telescope with a tracking drive and genuinely stunning optics.

Throughout this time, the workshop continued to operate. Not only repairing instruments, but also quality control checking each Meade unit that came through the door. Anyone with a Meade LX200 classic will be familiar with the sticker: